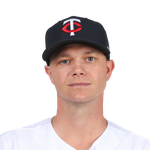 Two dreadful starts late in the season severely hurt what was otherwise a strong 2020 campaign for Gray, though it was a bizarre year. His strikeout rate surpassed 30% for the first time in his career, while his walk rate jumped to 11.1%. He was also far more hittable, particularly his slider and curveball, which had been dominant pitches in 2019. But even if Gray simply repeats his 2020 season, his strikeout rate and decent ERA and WHIP should be enough to make him a borderline SP2 for fantasy leagues. He will likely begin the year on the IL after experiencing back spasms in mid-March, but the injury doesn't sound like it will keep him out for long. Considering we've seen much more than that from him in 2019, fantasy managers should have little hesitation drafting him.