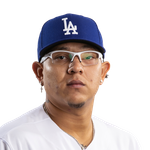 Urias had an interesting season (other than his postseason, which was dominant). His numbers overall were very solid, with a 3.27 ERA and 1.15 WHIP. But his strikeout rate dipped dramatically as a full-time starter, and his SIERA (4.88) and xFIP (5.06) suggest he got lucky. But the bottom line is that Urias is excellent at limiting hard contact, and he's allowed just a .257 BABIP over the last two seasons, which should keep his ERA in check. The Dodgers' rotation is overflowing, so it's possible they continue to limit Urias's innings. But for now, he should be considered an SP3, and as his playoffs showed, there's plenty of room for growth with his strikeout numbers.