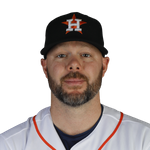 Pressly had his usual solid season, but got the benefit of closing for the Astros after Roberto Osuna's injury. His numbers fell off a bit from the previous two years (his 1.33 WHIP was particularly out of character), but he will almost certainly rebound from the .365 BABIP he allowed. He's slated to again be the Astros' closer, and as such, should provide plenty of saves while giving fantasy managers positive value in ratios. That makes him one of the few reliable closers worth drafting at more than a late-round price.