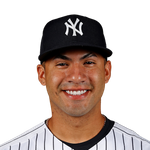 Torres missed some time with quad and hamstring strains last season, but his year was an absolute disaster even without it. He batted just .243 and hit a mere three home runs in 160 plate appearances. The culprit was that he was reportedly out of shape, a byproduct of the long layoff between the original spring training and when baseball resumed months later. There's every reason to buy into the excuse given Torres' track record, especially since he bounced back a bit in September and October with an .842 OPS. Expect more typical numbers from Torres this year, meaning around a .270 average, 30 home runs, and plenty of counting stats. Given his ADP, he's likely to be a bargain this year.