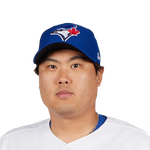 Fantasy managers expected some regression from Ryu after his career season in 2019 and with him moving to the Blue Jays, but it really didn't come. He continued to be among the best in the game at limiting opposing batters' quality of contact, and upped his strikeout rate to 26.2%, second best of his career. Ryu's 2.69 ERA was a bit higher than the 2.32 mark he put up in in 2019, but his FIP, xFIP, SIERA, and xERA were all the same or better than the previous year. In short, other than the potential for injury, which hasn't been a factor in the last two seasons, there's no reason to doubt Ryu at this point.