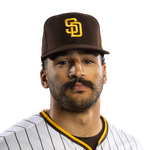 Grisham had an excellent debut season with San Diego, reaching double digits in both home runs and steals in his 59 games. He improved on his already strong walk rate from 2019, and improved his quality of contact significantly. Whether or not you buy the bat, we know he has plenty of speed to do damage on the basepaths, as he ranks in the 96th percentile in sprint speed. Slated to lead off again for a strong Padres lineup, Grisham should provide plenty of runs scored to go along with his potential for a 20-20 season. Monitor his hamstring strain he suffered in the spring, but unless he looks like he'll miss significant time, draft him with confidence.