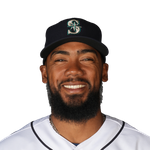 Hernandez missed 10 games due to injury and still put up an impressive 16 home runs in his mere 50 games. The statcast leaderboard is peppered with Hernandez's name, as he hit the ball hard consistently throughout the year. He also upped his line drive rate significantly, which his why the underlying statistics supported his massive jump in batting average. But it's hard to tell if Hernandez's 2020 season was real or just a very hot 50-game stretch. After all, he still struck out more than 30 percent of the time, and his walk rate dropped by about two points. In the end, given his home park and his supporting case, you can buy Hernandez as a 35-homer bat who will chip in steals and help with the remaining counting stats. But assume he hits closer to his .245 batting average, and don't count on the 50 homer pace you saw last year.