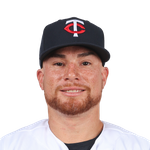 Vazquez was a late bloomer, but he's developed into one of the more reliable catchers in the game. Not only does he provide 20-homer power, but he's one of the best assets at catcher in both batting average and stolen bases. Entering his age-31 season, there's certainly the possibility for a major decline in his numbers, but there is little in his underlying metrics to suggest it is imminent. Draft Vazquez as a strong starter in single-catcher formats, and you won't need to do so before the double-digit rounds.