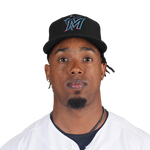 Segura's strikeout rate ballooned last season to above 20%, though his walk rate also took a corresponding jump. But other than that, there wasn't much notable or exciting about his season. He ran a bit less than usual in the shortened year, but he still ranked in the 87th percentile in sprint speed, suggesting that the stolen base potential is still there if he wants to take it. The bigger issue with Segura as he enters his age-31 season is that there's almost no upside, as he'll bat near the bottom of the order and has established a fairly firm ceiling in his career. He's a borderline startable middle infielder in mixed leagues, but nothing more.