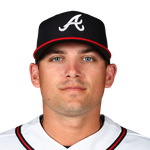 Riley made some notable gains last year after he looked like he might fall out of fantasy-relevance entirely with the way he closed his 2019 season. He essentially traded off some power for contact, as his swing percentage dropped, his contact rate increased, and he improved on both his walk and strikeout rates. Although there was some question as to whether the Braves would add another third baseman in free agency, it appears they're content to roll with Riley to begin the year. That should make him a cheap source of power for fantasy, one whose batting average (.262 xBA last year) won't hurt you too badly.