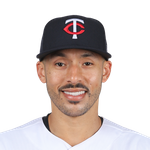 There's still plenty of upside with Correa, as he showed when he hit 21 home runs and drove in 59 runs in just 75 games in 2019 and went on a postseason tear last year. But he's also one of the bigger injury risks in the game, given that he hasn't topped 109 games played since 2016. The steal potential that he showed early in his career is gone after he struggled with back issues, as he hasn't stolen more than three bases in any of his last four seasons. That leaves Correa as someone who will likely contribute, but not excel, in four areas. With his upside, there's still a lot to like about his fantasy outlook. But realistically, with a different name on the back of his jersey, he'd probably go several picks later than he does.