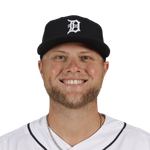 Meadows missed time with an oblique injury last year, and, more importantly, because of complications from COVID-19. Meadows's strikeout rate ballooned to 32.9% and his average fell to just .205 in 2020. Even if you expected regression from his 2019 season, he's just much better than a player who put up the 87 wRC+ and .292 wOBA we saw last year. Though it's absolutely fair to write off Meadows's season entirely, it's a bit worrisome that he struggled so much against lefties (.143 batting average), as that could potentially open him up to a platoon situation if he struggles against them out of the gate. The best course of action is to discount him from his numbers in 2019 for certain, but still buy him as a strong third outfielder, which should bake in the risk of any continued struggles against his upside.