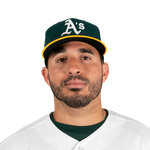 Laureano had a down 2020, which included a .213 batting average and a sharp decline in his Statcast data, as well as his steal attempts. But he had provided a fairly solid baseline over the two prior seasons, with a .288 batting average, 29 home runs, and 20 steals while being caught just three times over 171 games. Laureano doesn't excel anywhere, but he'll chip in almost everywhere, and you can get him beyond the 12th round in most drafts. He's an ideal fourth outfielder in mixed leagues.