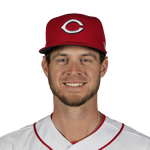 Myers talked openly about making a swing change last year, and it paid off in a big way. He raised his average by nearly 50 points over the previous year while cutting his strikeout rate, and ranked in the top seven percent in barrel rate. Myers didn't run as much as previous years in the shortened season, but he still ranked in the top 85% of the league in sprint speed. His average will likely come down to closer to its career .254 mark. But he has earned a bit of a leash at least with his strong 2020 campaign, and should be a fine power-speed combination who will put up solid overall counting numbers.