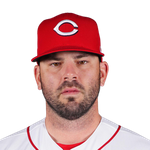 Because Moustakas was a hitter who played for the Reds, he had a poor 2020 season (seriously, look at their collective numbers). He walked more, struck out more, and lost some points on his batting average, but overall, there was little different in Moustakas's profile. He continued to hit for power and make quality contact. He may not score many runs given his lack of speed and surrounding cast, and the batting average isn't going to help you. But he's got plenty of power for a second-base eligible player, and there's no sign that his production is ready to fall off a cliff.