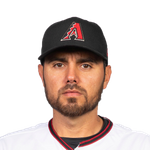 The Diamondbacks gave Soria a one-year, $3.5 million deal after his successful stint with the A's. Soria fixed his home run problem from 2019, which was an outlier for his career anyway, and his 2020 numbers looked much more in line with his typical output. Soria hasn't been named the closer, but given that he has totaled at least 16 saves in eight separate seasons, it's a strong bet that he'll begin the year in the ninth inning. The Diamondbacks aren't expected to be competitive, so if you do draft him, bank on him being traded to another team, and into another role, by mid-season.