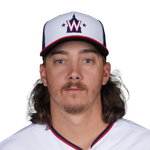 Harvey strained his oblique in spring training and was placed on the 60-day IL, meaning he's unlikely to contribute as the Orioles' designated closer, which was unlikely anyway with Brandon Hyde as the manager. Harvey had a ton of buzz heading into last season, but a strained forearm ultimately limited him to just 8 2/3 innings. He's got a dominant fastball that can reach triple digits, but his injury history has been a roadblock to him becoming a regular and reliable reliever. Hyde likes to go by committee anyway, and Harvey's injury should give him the chance to do just that again. Perhaps spend a last-round pick on Harvey, but better yet, leave him undrafted.