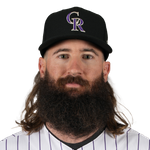 Blackmon hit just six home runs last year, and the quality of his contact was downright awful. His 86.9 MPH average exit velocity, 29.7% hard hit rate, and 4.9% barrel rate were all well below the MLB average and at or close to his career worst marks. And his sprint speed continued to decline to now what is essentially league average. The steals are likely gone for good, but even on his worst day, Blackmon will help you in batting average, runs, and RBI, and he was still on pace for 15 home runs last year. Blackmon may be on the downside of his career, but he won't cost you much and can still contribute solid or better numbers in four of five categories. With his draft price fairly modest, there's plenty of value there.