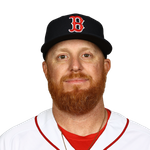 Turner signed a two-year deal with the Dodgers, and it's a bit of a mixed bag. On the one hand, he remains a key cog in an incredibly strong lineup where he's had plenty of success for several years. On the other, he's almost certainly going to see a downtick in his playing time given his age and the presence of Edwin Rios. Turner is still a batting average asset, has shown little decline in his batted ball data, and almost always produces when he's in the lineup. But he's much more valuable in daily transaction leagues where you can swap him in and out of the lineup.