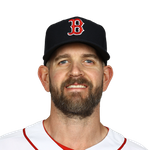 Paxton missed almost the entire 2020 season after straining a flexor in his pitching forearm. Any forearm injury is worrisome because of the connection to the elbow, and Paxton has hardly been the picture of health in his career. He'll try to jumpstart his career again back with the Mariners, and the reports from his workout, where he reportedly touched 94 MPH, were encouraging after his velocity drop last year. When he pitches, he's almost always effective, so he's worth a late-round pick for the potential upside. But the injury history should keep him relatively low on your draft board.