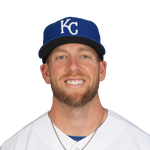 Dozier is almost entirely off the fantasy radar this year, but that feels like an overreaction to 2020. Yes, his poor performance last year makes his breakout 2019 performance seem like an outlier, but really, it seems like 2020, rather than 2019, should be discounted. Dozier's quality of contact was awful last year, but it was out of character for him over the previous two seasons, and was more likely the result of him having tested positive for COVID-19 rather than from a sudden loss of skills. The Royals' lineup is sneaky deep, and Dozier will start at third base this season, giving him eligibility at three positions. Considering he's free in drafts, there is every reason to scoop him up with a late-round pick.