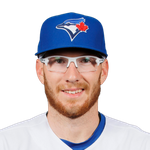 Jansen's playing time is uncertain this year with the presence of both Reese McGuire and Alejandro Kirk, but his defense is likely to keep him in the mix as a starter most games. He hasn't developed into the offensive force most thought he would become, and his average has been downright dreadful. But he's put up 19 home runs and 59 RBI over 150 games in the last two seasons, and the Toronto lineup is incredibly strong. If he wins the job outright out of spring training, he should be considered a fairly strong second catcher.