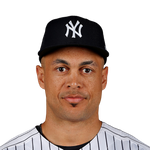 It's all about the injuries with Stanton, as after two healthy seasons, he's been limited to just 41 games over the last two. There's little to analyze with the slugger other than his health. He still hits the ball as hard as anyone and walks and strikes out a ton. There's been little decline in his batted ball data over the last two years, but even if there had been, the sample size would be too small to draw any conclusions. Stanton is likely eligible at utility only in your league, but that limitation should let him come as a discount in drafts. Have power on your bench ready to fill in if you draft Stanton, but there's no reason to run from him.