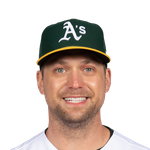 After missing the 2018 season and most of the 2019 season, Rosenthal bounced back in a huge way last year. He stepped in as the Royals' closer, notching seven saves, and then was unhittable with the Padres after a mid-year trade. He parlayed his success into a one-year contract with the A's, where all signs point to him being the undisputed closer. Rosenthal was an outstanding reliever in his prime and once had back-to-back 45-save (or better) seasons. And his raw stuff looked excellent last year, as he totaled the best strikeout rate of his career. If he stays healthy, he has a shot at being a top-5 closer, but you can draft him a little later than that and likely make a profit.