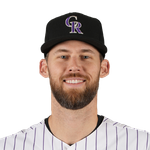 Bard comes into 2021 as the Rockies' presumptive closer, after he came out of a two-year retirement to pitch in the majors for the first time since 2013. Bard's control problems, which derailed his career, were largely solved, and his 3.65 ERA and 1.30 WHIP were more than passable for a Colorado closer. Mychal Givens remains, and Scott Oberg will try to pitch effectively after undergoing thoracic outlet surgery, but if Bard can maintain his control, he'll likely earn and hold the closer's job.