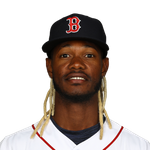 Tapia doesn't make a ton of hard contact, but he slashed .321/.369/.402 last year and led off for the Rockies for the majority of the season. He's slated to do so again this year, which means he should be a cheap source of runs, batting average, and steals. Tapia's been around for awhile and never held a starting job all season, but he's in an excellent position this year and can be drafted late in all mixed leagues as a fifth outfielder or bench player.