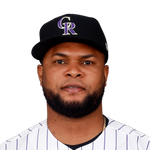 Colome has been a quality major league reliever for year, but last year, managed to drop his ERA down to a silly 0.81 and his WHIP below 1.00 for the first time in his career. His success was largely on the back of increased movement on his cutter (which induced a ton of weak contact, but which was also less of a strikeout pitch, leading to a drop in strikeouts), as well as Yasmani Grandal's pitch-framing skills. He'll now move to Minnesota where he'll likely form some sort of committee with Taylor Rogers. He's worth drafting, but only very late, and with the expectation that he won't pile on a ton of saves.