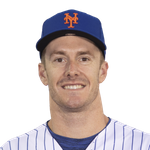 Fantasy managers seem to have declared Canha's 2019 season as a fluke after he hit just five home run last year, but much of his 2020 seems to suggest 2019 was fairly legitimate. Canha built on his massive gains in walk rate in 2019 (13.5%) and increased it to 15.2%, and his quality of contact largely remained the same. He's got 20-homer power still, and he'll likely lead off or bat second for the A's. You won't need to pay much for him and given his average draft position, there's a high probability of a profit.