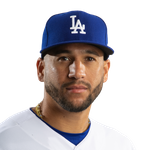 Peralta is entering his age-34 season and coming off a season during which he hit just five home runs, but he still makes a fairly reliable late-round selection. His career batting average is .291 (and he hit .300 last year), and his 162-game pace is roughly 20 home runs and 160 combined runs and RBI. Even if his steals are gone, there's still plenty of production left in the bat for someone who will be drafted well beyond the top 200 picks, and who had shoulder surgery prior to the 2020 season which likely affected his production. The upside isn't there anymore, but safe and boring can sometimes be the right move.