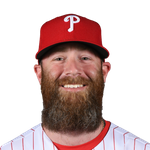 Bradley joined the Phillies on a one-year deal after a successful 2020 season with Arizona and Philadelphia. He performed admirably over the past two seasons as the Diamondbacks' closer, and last year put up a very solid 2.95 ERA, 1.09 WHIP, and 24.7% strikeout rate. The Phillies were open about their desire to add some velocity to their bullpen and Bradley does just that. But although Joe Girardi has indicated he'd like set roles for the Phillies' bullpen, those roles may not be decided until close to the end of spring training. Bradley is worth drafting, but only late, as he may go back to his former role as a setup man.