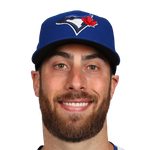 Bass will likely be in the mix for saves with Yimi Garcia (and possibly Dylan Floro) after he signed a two-year deal with the Marlins. He lacks the typical strikeout stuff of most closers, but he's totaled 12 saves, a 3.54 ERA, and a 0.99 WHIP over the past two years. Bass is an extreme ground ball pitcher (62.3% ground ball rate last year), which is how he's able to survive without big time stuff. But Don Mattingly likely won't name a closer until the end of spring training, so draft Bass late for now, but have plenty of other bullpen options.