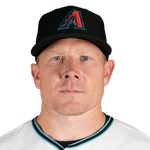 Melancon had another fine year as the Braves' closer, and now joins the back end of the Padres bullpen. It's unclear if he'll serve as the closer, a Drew Pomeranz and Emilio Pagan also may have a claim to the role. Melancon is entering his age-36 season and his strikeout rate is mediocre at best. Although he is still performing well, his lack of pure stuff suggests that the wheels could come off at any moment. That said, he'll have plenty of value if he can earn the ninth-inning role, so monitor the reports out of spring, and draft him late until and unless he's officially ruled out for the role.