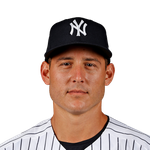 Rizzo's average dropped to just .222 last year and his counting stats waned, though the latter failing was much more due to the lack of production from the rest of the Cubs lineup. His walk and strikeout rates, however, stayed mostly in line, and his BABIP was an artificially low .218 (career mark of .289), which is partly why there was such a gap between his xBA of .266 and his actual batting average. With that said, Rizzo didn't hit the ball nearly as hard last year, as he saw career worsts in average exit velocity and hard hit rate. He likely won't ever be the player he was at his peak, but there's still plenty in his bat that can help fantasy managers, including the handful of steals he will throw in each year. He's a starting-caliber first baseman still, without question, and he'll go at a discount because of last year's numbers.