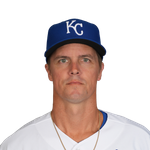 Greinke is entering his age-37 season, but still somehow keeps getting it done. His ERA of 4.03 last year was certainly higher than fantasy managers are used to seeing, but it came with a 2.80 FIP and 3.51 xFIP. His strikeout rate was his best since 2017 and his walk rate of 3.3% was the best of his entire career. But his velocity was down about two ticks, with his fastball clocking in at just 87.9 miles per hour. Greinke is as smart a pitcher as there is but it's going to be difficult to succeed over the course of a full 162-game season if his pure stuff continues to diminish. He's one of the few pitchers in the game who is probably capable of pitching 200 innings in 2021, but expect a continued downward trend in his performance.