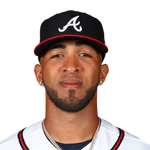 Rosario stays in the AL Central, signing a one-year deal with the Indians after a successful tenure with the Twins. He's established a fairly reliable power baseline at this point, and he usually offers some batting average to go with it. Last year, however, his batting average dipped to just .257, in part because he became much more passive (8.2% walk rate, 51.2% Swing%, both far out of character for his career). The bigger issue was that Rosario largely cut down on his swing percentage on pitches in the strike zone, but continued to swing at pitches out of the zone at a 41.2% clip. That likely explains his lower than usual average exit velocity and barrel rate, and it's something that's easily correctable if he just goes back to his previous approach. At the very least, Rosario should chip in 25 home runs at least, while helping out in runs and RBI, and he's a fine third outfielder in mixed leagues.