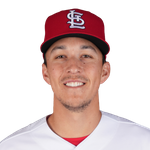 After a highly successful 2019 season in which he hit 11 home runs and stole 15 bases in 92 games, Edman's numbers regressed in nearly every meaningful way last year. His batting average slipped from .304 to just .250, he hit just five home runs, and he went 2-for-6 in stolen base attempts. Edman was a bit unlucky last year, as his xBA and xSLG outperformed his actual numbers. And despite his down year on the basepaths, he was in the 95th percentile in sprint speed. He's likely to lead off for the Cardinals this year, and should be good for double digits in both home runs and steals, with plenty of runs scored. Considering he has multi-position eligibility, he should be drafted before the double-digit rounds.