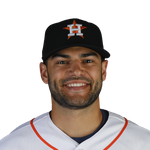 McCullers made a successful return from Tommy John surgery after missing the 2019 season and looked almost exactly like the 2018 version of himself. His ERA (3.93) and WHIP (1.16) were within seven-tenths of a point of his 2018 numbers, and his walk and strikeout rates fell just slightly. McCullers relied a bit more on his sinker and less on his curveball than in past years, but the two work well together and he continued to throw them in combination about 80% of the time. In short, what you thought of McCullers heading into 2018 is pretty much what you should think of him now. Unfortunately, that includes concerns about his innings, because after a missed year and 55 innings last year, the chances of him topping 150 innings this season are remote. Buy him at his production, but understand that there's likely a hard cap on his innings total.