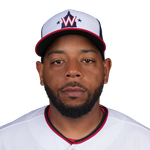 Smith showed he had the bat to hit in the majors in 2019, but he took an extra step forward in last year's shortened season. His .316/.377/.616 slash line effectively forced the Mets to find a way to get his bat into the lineup, even if his defense tried to prevent it. His Statcast data was excellent, as he put up a barrel percentage of 13.3% and a hard hit percentage of 46.7%, all with a .405 wOBA, which was in the top four percent of the league. The issue for Smith is his fielding and with the National League surprisingly not adopting the designated hitter, that means he'll need to play out in left field most days. Although the Mets can surely live with the tradeoff, Smith will likely lose plenty of at-bats late in games as he gets switched out for defensive purposes. He'll still have plenty of value, but without the DH, be cautious with your projections for his counting stats.