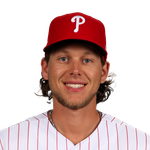 Bohm's major league debut was a success, in that he batted a robust .338 with an .881 OPS. But despite hitting the ball hard consistently (his 10.3% barrel rate and 46.8% hard hit percentage was well above the major league average), he hit just four home runs, and his xBA was just .286. The problem is he simply pounded the ball into the ground, putting up a 53.2% ground ball rate and just 4.8 degrees of launch angle. Bohm never showed a ton of power in the minors, but he's just entering his age-25 season, so there's always room for growth. But for redraft leagues, buy him as a high-average bat with unexceptional power.