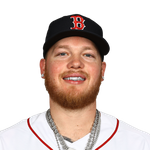 Verdugo's first season in Boston went about as well as you would have expected. He hit for a high average, scored plenty of runs, and added just a bit of power and speed. But under the hood, there were some concerning signs. Specifically, his quality of contact was generally below the MLB average in every notable measure, and his expected batting average was just .238, a full 70 points below his actual batting average. And his strikeout rate rose to 20.4%, a career worst. But, in the end, Verdugo is going to continue to lead off for the Red Sox and contribute in both batting average and runs scored even on his worst day, and he'll offer at least some production in the remaining categories. Nitpick if you must, but he'll be a valuable contributor overall, regardless of the Statcast data.