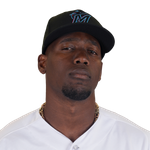 Soler's injury-shortened 2020 season didn't live up to his massive 2019 campaign, but he did show that a lot of his gains were legitimate. Yes, it was more of a 30-homer pace, but his barrel rate, average exit velocity, and hard hit rate were all elite, as they were the prior year. Soler struck out way too much (34.5% of the time), and if he can't fix that, then his average will suffer as it did last year. But, his walk rate remains high and the power is going to be there with how hard he hits the ball. He's a source of cheap power you can grab later than other similarly-profiled bats going several rounds earlier.