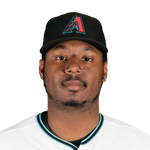 Even in a shortened year, Lewis managed to have two distinctively different seasons en route to the AL Rookie of the Year Award. In the first half, he hit .368 with seven home runs. In the second half, he hit just .150 with four home runs. Lewis has plenty of tools but needs to cut back on his strikeouts if he's going to avoid the ups and downs he saw last year. His average is likely to hurt you, but he has 25-homer pop, and can throw in a handful of steals. Despite his rookie of the year award, there's not a ton of buzz on Lewis after his late-season slide, so he'll likely come at a discount.