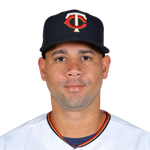 If you want to credit last season's numbers, then you're going to avoid Sanchez like the plague. He batted a ridiculous .147 and struck out 36% of the time. When Sanchez did hit the ball, he still hit it really, really hard, like he always has. But he just simply can't stop himself from swinging (13.8% swinging strike rate), and especially from swinging outside the zone (31.5% O-Swing%, which was actually better than his career rate). It wasn't that long ago that Sanchez was one of the top catchers drafted, and he's still just 28 years old. If he can just cut down on his whiffs, he can easily be a top-five catcher, so buy him for his upside, while also making sure to focus on batting average elsewhere.