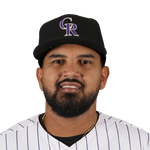 If Marquez ever extricates himself from Colorado, you'd probably have a bona fide superstar on your hands. As it is, you have a very solid overall pitcher who won't really help you out tremendously in any category, but won't hurt you badly either. Marquez's control is above average, and although his strikeout rate has dipped in two consecutive seasons, he has the ability to miss bats regularly. His value rises in leagues with daily lineup changes as you can avoid him at home (career 5.10 ERA) and start him on the road (career 3.51 ERA). But, absent that, consider him a back-end of the rotation starter in deeper leagues.