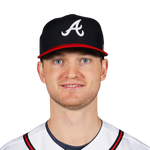 Soroka pitched in just three games last year before rupturing his Achilles tendon. He's progressing well but the best case scenario for him appears to be a late-April return. When healthy, he's someone who fantasy managers can rely on as an ERA and WHIP stabilizer, who should contribute plenty of wins. The strikeouts won't be there, however, and given that he's coming off a significant injury, the Braves will likely be extra cautious with him when he does start. All that to say, don't draft Soroka expecting much more than 100-120 innings out of him. If you do that, you'll likely be happy with your return on investment.