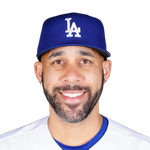 Price was traded to the Dodgers along with Mookie Betts, but hasn't yet made a start with the team after opting out of the 2020 season. He'll be back for 2021, but his role isn't yet solidified according to reports, especially considering the extreme depth of the Dodgers' rotation. When healthy, even at his advanced age, Price is still a quality major league starter, with above-average strikeout and walk rates. The issue for Price is really health, as he's averaged only about 120 innings per season over his previous three years. His average draft position reflects the risk, and assuming he does end up in the rotation, he offers as much upside as anyone going in his range. There's still juice left for Price when he's healthy, so monitor reports out of the spring.