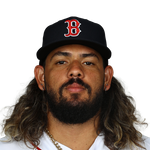 Alfaro batted just .226 in 2020, but he hit .262 from 2018-2019, along with 28 home runs in 238 games. He has been criticized for his defense, but he reportedly worked on it during the offseason and has received some praise this spring. After flirting with trade talk, the Marlins look like they'll stick with Alfaro, and his bat plays well enough to make him a high-end second catcher in mixed leagues. The stardom that some projected may never come, but he'll likely be fantasy-relevant in 2020.