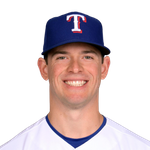 Solak hasn't shown a ton of power in the majors so far (just seven home runs in 91 career games), but he makes consistently strong contact and always had pop in the minors. His more than reasonable strikeout rate should generally keep his batting average in check, and his stolen base acuity (nine stolen bases in the majors, 91% in sprint speed) makes him a potential five-category player. Add to that multi-position eligibility, especially at the thin second base position, and he's an excellent mid-to-late round draft pick that should fill up the stat sheet without costing you as much as his numbers say he should.