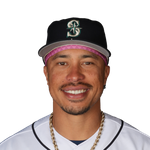 Wong lands in a great situation with the Brewers, where he's expected to lead off in front of a strong lineup. His quality of contact is incredibly poor, but in Miller Park, he should be a good bet for 10-15 homers, and he'll throw in 15-20 steals despite having a fairly average sprint speed. There's not a ton of upside for Wong, but absent injury, there's not a whole lot of downside for him in Milwaukee either. He's not a startable second baseman in mixed leagues, but he's a fine middle infielder or bench option.