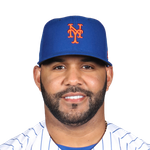 Villar's quality of contact dropped significantly last year, but given how out of character it was for his career, the decline can probably be written off to the small sample of the shortened season. But he was still one of the league leaders in stolen bases with 16 and he showed no hesitation about running whenever he got the chance. The bigger issue is that Villar won't have a regular role now that he's with the Mets, but instead will be a super-utility player. With that said, Villar's versatility should allow him to see a few starts each week, and he should see action as a defensive replacement and pinch runner. All that to say that Villar should tack on 15-20 steals over the course of the season, and therefore make a viable middle infield option despite his lack of a regular role.